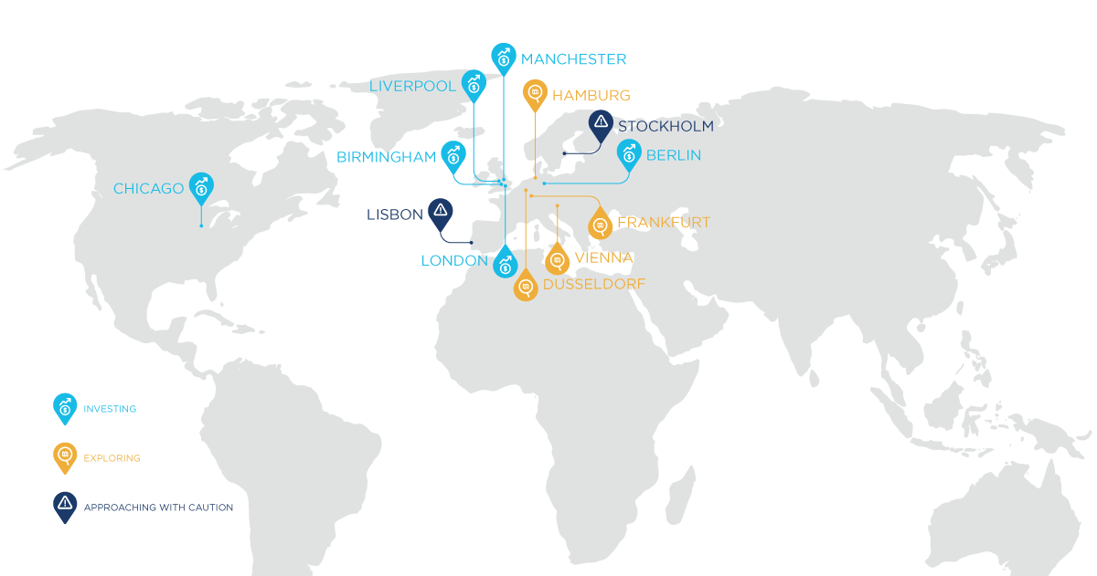 London continues to hold firm as the world’s leading business and commerce capital and remains one of the command centres for the global economy. Crossrail is transforming the city. Expected to accommodate 200 million passengers per year and cut average commuting times by up to 25%, property prices along the Crossrail route are expected to see a 13% to 20% increase upon its completion (2). Savills forecast rents to rise considerably faster than property prices over the next five years at 24.5% (10). Between 2011 and 2016, the number of jobs in London grew 18% and the number of people increased 7%, while the number of homes grew by only 4% (4). It is estimated that London will need 64,000 homes built in 2017 to meet growing demand, a figure far above the 42,000-unit target set in the London Plan (8). Private renting is on the rise, too, and rental growth for flats over the last decade is at 45% (5). Vacancy rates meanwhile are the lowest they have been in a decade, hovering around 2.5% (7). Between 2017 and 2021, prime central London property prices are forecast to rise 15.2%, with Greater London property prices set to rise by 19.2% over the same period (3).

Voted the best place to live in the UK four years running by the Economist Intelligence Unit’s Global Livability Survey, the Northern Powerhouse city of Manchester is in high demand and experiencing rapid growth. House prices are on the up, with a 25% rise in the last five years. Rents are forecast to increase 20.5% from 2017 to 2021 (2). Healthy rental yields of 6.73% gross were recorded at the end of 2016 too (4), with 63% of households privately rented. By 2025, some 55,000 new jobs are forecast to be created in the city centre alone according to a study done by BNY Mellon (3), and this is likely to create more demand for housing.

The second largest city in the UK by population, Birmingham also has a reputation as being a leader in education (3), as a home to five universities and more than 75,000 students. With big investment plans underway including its 20 year Big City Plan and GBP1 billion public sector investment committed across the city in transport and digital infrastructure (2), Birmingham has plenty of potential. Prices are on the rise seeing growth of 6.37% from 2015 to 2016 (8). Knight Frank estimates 17% growth in capital gains from 2015 to 2019 (6). Upward pressure on prices looks likely to continue as demand forecasts of 4,200 homes by 2021 surpass the forecasted supply of only 2,300 over the next three years (9).

The North of England’s second largest regional economy is booming, thanks in part to the significant investment the city has benefitted from over the last ten years. Housing is still forecast to see major growth with prices being 4.9% below their peak. Rents are also on the up, with predictions of 17.6% growth from 2017 to 2021 (3). With 50,000 undergraduates across Liverpool’s three largest universities, and two thirds of homes in the city privately rented, there is growing demand for high quality rental properties from young professionals who account for nearly half of the population in the city centre.

With sound economic foundations and a population influx, Berlin continues to present itself as a promising destination for property investors. As the population grows and the city continues to cement its reputation as a start-up hub, the current 8.8% unemployment rate is expected to continue to decrease in the coming years (2). It is expected that there will be demand for 20,000 apartments per annum until 2030; supply last year was just shy of 12,000 apartments (4). This marks a deficit of up to 40% (4). Vacancy rates, on the other hand, hover at around 1.2%. Constant pressure is being put on house prices and Berlin has seen the strongest increases when compared to other German cities. The rental market is strong, with between 5.1% and 6.9% rental growth in the past three years, and approximately 6% in 2016 (5).

With 34 Fortune 500 companies calling the city of Chicago home, America’s third-largest city has cemented its status not only as an important financial hub but also a leading centre for the technology industries. The city can also boast a Gross Metropolitan Product of USD644 billion in 2016, up from USD630 billion in 2015. Residential real estate prices continue to remain below their pre-recession peak, allowing plenty of room for capital growth, which has been recorded at 36% in the last five years (3). Rents are also on an upward trajectory, increasing 10% in 2016-2017 (3).

Vienna is attracting people, not only because it is home to 20 universities including the University of Vienna and the Vienna University of Technology and WU with over 130,000 students attending these universities alone, many of which come from overseas, but also because Vienna rates third on the Innovation Cities Index. GDP is expected to grow by 1.6% from 2016 to 2017. Vienna is also currently ranked third for most affordable cities by QS Best Student Cities 2016. That may soon change, as demand for new housing due to the massive population influx puts pressure on property prices. Andreas Holler, CEO of property management company Buwog, estimated that in order to keep up with the population growth Vienna will need an extra 11,000 homes built this year alone (2).

With the highest GDP per capita in Germany (3), Hamburg consistently receives accolades for the quality of life that citizens enjoy. It can also count a third of the city’s residents below the age of 30 (3). Housing prices have experienced significant growth – 70% since 2009 (2), in part due to low interest rates, the normalization of which is still expected to be several years away. With a vacancy rate of just 0.7% according to CBRE VONOVIA (3), rents are expected to rise by 9.6% by 2018 according to HSH Nordbank (3).

A global financial centre and Germany’s financial heart, Frankfurt also offers excellent quality of life. Known as the “Green City”, it has a fantastic transportation system too. When compared to other major German cities, Frankfurt has a low unemployment rate of 6.4% (1). Jobs growth and an increasing population – a 12% increase in the working population since 2009, and steady population size growth of 5% in the last five years (2) – is leading to a shortfall in housing supply of approximately 36,000 homes in 2016 (1). Apartment prices increased by 10% in the same year while rents rose by an average of 3.5% (1).

Popular for foreign direct investment, Dusseldorf is a centre for international business and finance. Showing strength in a number of areas the city enjoyed jobs growth of 10.5% from 2009 to 2016 (1) and GDP growth of 2.73% from 2016 to 2017. Property prices have been on the increase in recent years; by 65% from 2009 to 2016, with rents increasing 33% in the same period. Property appreciation is expected to continue as long as interest rates remain unchanged. Vacancy rates are hovering between 2% and 3% suggesting that demand is strong, while building permits and completions fell by 50% in 2015. With 3.5% population growth forecast per annum until 2025, increased demand is likely.

Portugal’s largest city and capital is considered “the next Berlin” thanks to its low cost of living, great lifestyle, and its developing status as a hub for young entrepreneurs and start-ups. Generating around 45% of national GDP, Lisbon is also Portugal’s wealthiest city, with a GDP per capita of EUR22,500; 36% higher than the national average (6). Average household disposable incomes are also 15% higher than the national average (6). Government investment initiative Portugal Ventures has created a EUR450 million access fund to promote innovative start-ups. In 2016, Portugal’s Prime Minister António Costa unveiled a new EUR200 million venture fund for Lisbon start-ups. Attractive incentives are proving appealing, too, with non-habitual resident’s tax incentives (3) and the Golden Visa Programme (2). Average house prices rose 4.4% year-on-year in 2016 and still stand 11.9% above their 2013 low, with newer house prices rising by up to 30% between 2013 and 2016 (6). This demand is set to drive further upward; while housing construction rose 51% between 2013 and 2016, current housing delivery is still only 9% of that achieved in 2007 (6).

The capital of a country that is one of the most competitive, productive and globalized in the world, Stockholm has been nicknamed the “Unicorn Factory”, producing more unicorn companies (private start-ups valued at over USD1 billion) per capita than any other city in the world after Silicon Valley (4). Stockholm also generates around 33% of Sweden’s total GDP (7). The city’s population is expected to increase by 11% to over 1 million people by 2020 (1). To meet this demand the government has estimated that up to 50,000 homes need to be built annually and plan to invest EUR95 billion in infrastructure by 2025 (4). Half a million people are currently on a rent-controlled flat waiting list. House prices have been steadily increasing over the last five years with 15% house price growth recorded between 2014 and 2016 (3).